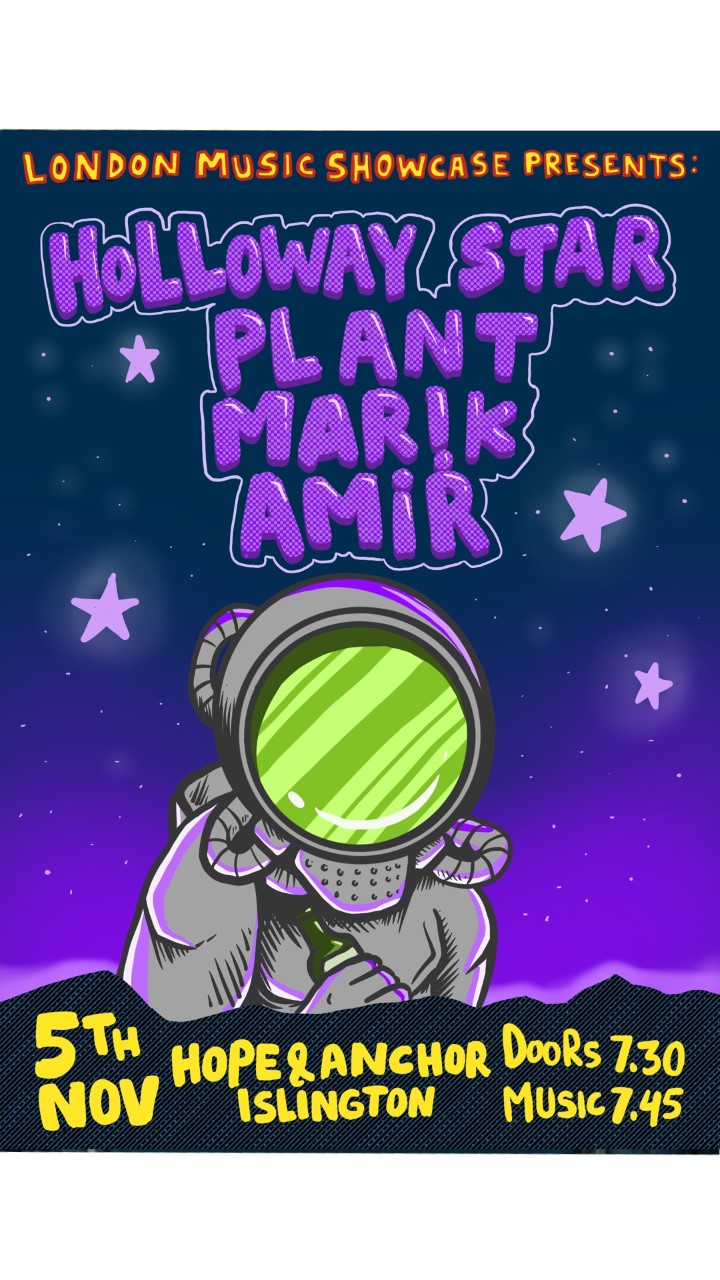 THE LONDON MUSIC SHOWCASE Presents: HOLLOWAY STAR / PLANT / MAR!K / AMIR! If you are new to London and have never been to THE HOPE & ANCHOR, this will be a great event to come to – It’s an awesome line-up, at a Top Venue in the Heart of London! Great place for a beer and see some amazing unsigned bands!

https://www.facebook.com/hopeandanchorlive/
Saturday 5th November
Hope & Anchor in Islington
—> HOLLOWAY STAR – 10:00pm
—> PLANT – 9:15pm
—> MAR!K – 8:30pm
—> AMIR – 7:45pm
HOLLOWAY STAR – are a five-piece combo mixing funk and disco rhythms within a rock framework. The members have previously released material under various guises – Most notably the work of keyboard player Guru George, who was a founding member of 80’s / 90’s pop act ‘Kissing the Pink’ who boasts appearances on Top of the pops and 2 top 40 hits. The guitarist was signed to Immortal records as part of Cambio who reached number 1 in the HMV alternative dance charts. Also in the lineup is Robbie on drums, Adrian Mozzi a multi-instrumentalist musician and music producer. Shane Nolan is the front man who brings original song writing and his dance roots where back in 2004, he was signed to Defected records.
https://www.youtube.com/watch?v=3oNIHJFbDlM
PLANT – is a London based electro-pop artist from Portland, Oregon. Combining dark synths and playful vocals, PLANT’s songs dance along to a precipice of emotion. This year has seen her release two singles; ‘Aftershock’ and ‘Headspace’, which have received extensive support from Spotify and BBC Introducing London. PLANT’s unique vocals have drawn attention from popular electronic dance producers and DJs including her recent successful collaboration ‘Downtown’ with Wankelmut and De Hofnar. PLANT brings her ethereal music to life on stage, With an immersive one-woman experience.
https://www.facebook.com/LondonMusicShowcase/videos/440392674474764
MAR!K – I call myself The Spontaneous Musician because most of the music I make is done completely on a whim. I’m an East London-born, Caribbean raised producer, rapper, singer/songwriter, guitarist, and bass player who likes blending modern genres with elements of freestyle. I like soaking up the styles and techniques of other musicians and incorporating them into my work. Doesn’t matter if it’s Hip-Hop, Trap and Electronic Music, Afrobeat, Reggae, Soca, Dancehall, Progressive Rock, R&B, Jazz, Funk, Indie, Classical or Metal, as long as it has a sound I’ll try to learn from it. I keep my music true to who I am. In a world full of carbon copies, I chose to be a compilation.
https://instagram.com/musicbymarik?igshid=YmMyMTA2M2Y=
AMIR – Born in north London to a Punjabi father and a mother from the midlands, AMiR has always had a burning passion for music. Spending his formative years learning guitar, piano and drums, AMiR crafts all his own melodies and lyrics, delivering them with his trademark funky vocal style. Combining accessible pop appeal with issues such as the search for good in bad, or how to move on when stuck in love and life. His songwriting talents have led to opportunities to work with Grammy award-winning producers in the United States and Europe, including Peter and Daniel (Matoma, Galantis, DFA) and Patrick Patrikios (Little Mix).
https://www.youtube.com/c/amirofficialUK
Hope & Anchor
207 Upper St
London N1 1RL
***IMPORTANT***
This is a ticket event:
———
Instagram: @londonmusicshowcase
https://linktr.ee/londonmusicshowcase
https://youtu.be/pNDpgayHt8Q
https://www.facebook.com/LondonMusicShowcase
https://www.meetup.com/London-Music-Showcase-Gigs-Drinks/
https://www.meetup.com/london-Bands-social-drinks/
Welcome to the Meetup Group

What started 5 years ago as a group of friends having fun meeting people at gigs, has become one of London’s Best nights out for discovering NEW MUSIC. We go to gigs regularly every week and events are always well attended – look at the pictures, there’s over 2000 of all the great nights out and fantastic music we have enjoyed right here in London. It’s a mix of regular members and newcomers so feel free to come on your own and meet new people. We’re a friendly mix; French, Portuguese, Italian, Spanish, Japanese and English people so I’m sure you will meet someone that shares a passion for Rocking Music. We share a passion for GOOD VIBES and amazing MUSIC. Thank you everyone that has come over the years – Good friendships / memories have and continue to be made.
7:15pm – Start with Chat / Drinks
7:30pm – Doors open for Gig
7:45pm – Music Starts
Don’t worry if attendance looks low, we are meeting other Meetup/Whatsapp/Facebook Groups and a lot of my friends don’t RSVP – Message your whatsapp number if you want to join us

DISCLAIMER:
I work for the Venue / Promoters. It’s just for fun nights and meeting people. We are not responsible for you or your belongings. By attending this event you agree to waiver liability for the Host

Please bring ID to all events 18+ Thank you