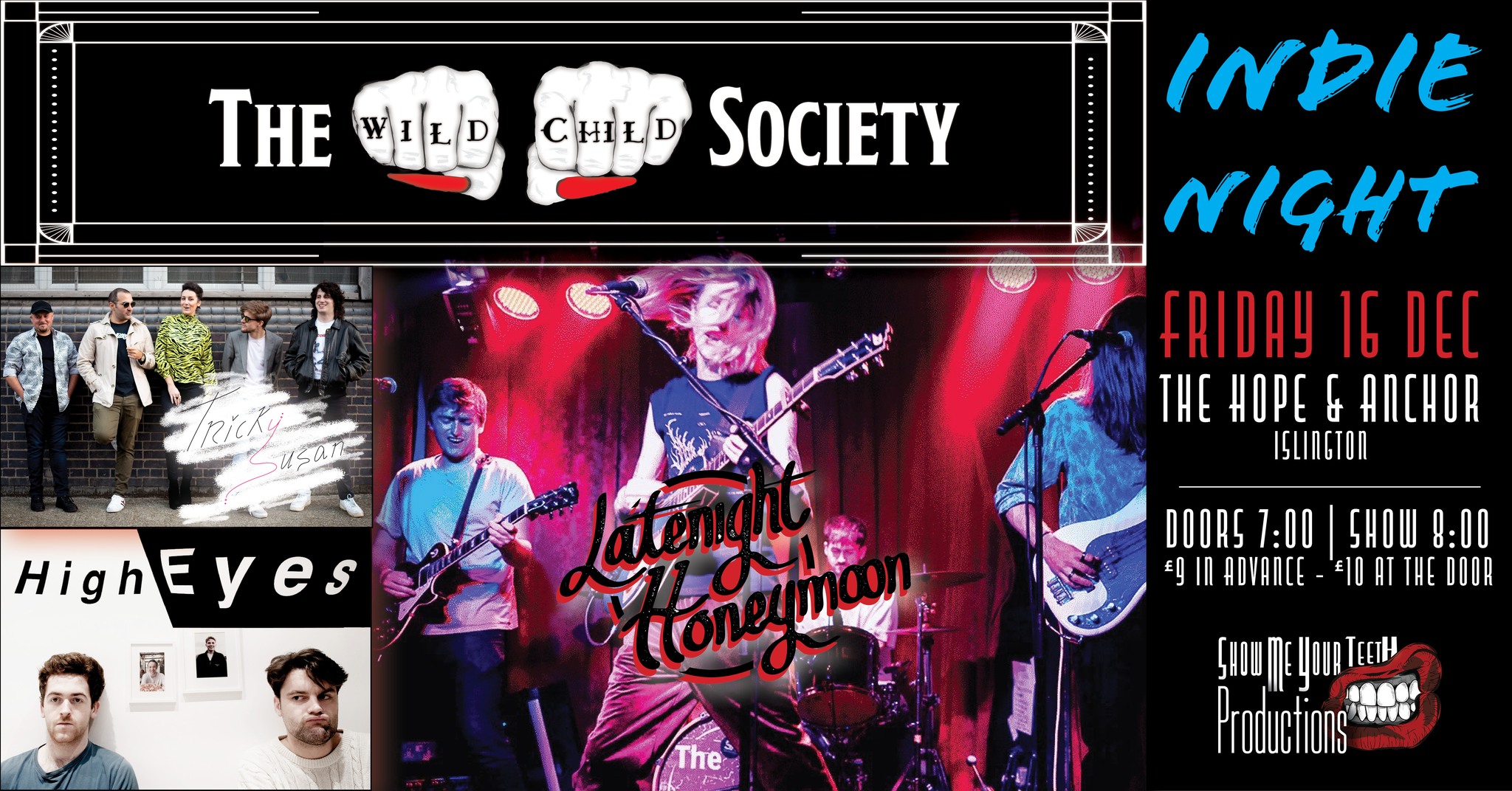 The Wild Child Society Presents INDIE NIGHT with Latenight Honeymoon, High Eyes & Tricky Susan at The Iconic Hope & Anchor!!
Meet Your Bands:
LATENIGHT HONEYMOON
Latenight Honeymoon arrived in the form of their debut singles
Sunlight & For Heaven’s Sake Mixed by Mike Fraser (Foo Fighters, Biffy
Clyro, Franz Ferdinand) released on the first day of Spring 2020 to
deliberately state a new lease of life from a band who prior, only had a
couple of demos available online and at live shows. These demos & a
growing reputation of a evocative live performances led to shows supporting Bloc
Party, Bang Bang Romeo and King No-One, as well as performances at Isle of Wight
Festival 2019 & Truck Festival 2019.
Post lockdown latest releases ‘Death by Hologram’ & Josephine’s
Promise’ were recorded at Brassica Studio, home of Cabbage, then
mixed by Grammy award winning Mark Rankin. Following the success of their latest single
’Today is the day I turn my life around’, Latenight Honeymoon are set to release their debut EP in the new year.
HIGH EYES
“Hi beautiful, we are High Eyes, a 4-piece North London band preaching lyrical rock tunes with British vibes and funky energy. If you held up a mirror to us, we would hope to see Nile Rogers and Albert Hammond Jr’s love child, surrogated by Mike Skinner.”
TRICKY SUSAN
A London-based band, Tricky Susan immediately snatch your attention with their hook-centric, impassioned hits. Whether it’s their tales of unbridled passion; clandestine operations or unrequited love – their penchant for intertwining an urgent message with an even more urgent guitar lick or disco beat gives them their unique sound. They’re targeting your brain, heartstrings and dance shoes all at once, and they don’t like it when they miss. It won’t take you long to get what this lot are about.
Tricky Susan have been quick to garner excitement from audiences to date and regularly gig The Dublin Castle; The Water Rats; The Amersham Arms and many more of London’s infamous indie-music pit-stops. Earlier in 2022 they raised £1k for the War Child Live ‘Rising’ Competition and they reached the National Final of the Soundwaves Music Competition at the O2 Institute, Birmingham. During the pandemic lockdowns the band released two singles, ‘Undercover’ and ‘Grab’ and with two more singles on the way in 2022 they are ecstatic to be back making their presence known on London’s live scene. You will not want to miss them.